But a strange thing happened the day before the hard work and diligent efforts came to a culmination on Friday night. Mitt Romney, the presumptive Republican Presidential candidate came to town and pronounced that there were “disconcerting” elements that had creeped into the Olympic proceedings, suggesting that London was not quite ready for prime time. Governor Romney probably had the credentials to make that statement given his work as CEO at the 2002 Winter Olympics in Utah but perhaps failed to show proper wisdom in bestowing his ideas on the Brits just a day or two before the events began. Regardless of the political implications, perhaps a greater surprise is that his statement had such an enormous effect on the British psyche. It seems as if Romney’s observations (which had merit) knocked Londoners back on their feet and had them questioning (for a few minutes at least) whether they screwed up royally. 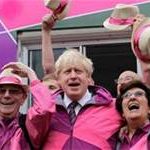 Fortunately a rally on Friday morning had the Mayor of London asking this question of 60,000 people “Are we ready?” which led to the only appropriate and true response…”Yes” Self-esteem and confidence plays an amazing role in how we feel about ourselves and whether we believe we can do what we need to do. In London last week a US visitor threw an unintened punch at the British empire and they reeled from it quesitoning whether they were in fact ready for the Olympics that they have been preparing for over 10 years. For me, managing my self-esteem is a daily process. It is easy for mine to get ruffled whether it is a setback at work or at play. If I hear or read about something negative I’ve done or what someone thinks of me, I immediately begin to question and feel bad about myself.  Taking some tips from our friends over in London, here are three things that I am going to keep in mind the next time a presidential candidate says something disconcerting about me. Like you and I there were a lot of people across the pond who, just a few days ago, were questioning whether their hard work and tireless efforts were all for naught.  Just a few comments from an outsider had them wondering if they had somehow failed in their efforts and the world was coming to an end. But they gathered up their friends, did some fun things and got on with their list of 1,000,000 things they had been working on for a long time

By the end of Friday night, they had already started to change the world.]]>