Now I think George Will customizes his lectures to challenge his audience and given the predominant older population in Sarasota, he went right at the core issue of Medicare and Social Security suggesting that the Social Security age should be raised to 74 and that significant changes should be made to Medicare including increasing co-pays and patient responsibilities for the management of their own health. That is where I got in trouble… I am passionate about helping people become better consumers of health care. I’ve heard all the arguments…”Health care isn’t like other services”. “The doctor patient relationship is sacred and money shouldn’t get in the way”. “People can’t understand about the complexity of health care costs”. “We shouldn’t have to worry about health care costs when we are sick”. With all that, I am convinced that patients like you and me must become more involved in questioning and understanding how much medical procedures cost. Its really a simple question…”Doc, how much do these different procedures cost?” So Mr. Will looks up at the vast audience in that beautiful hall and asked “Has anyone ever asked their physician how much a medical procedure cost? My hand shot up as I had just spoken to my knee doctor about the costs for three different options to treat my chronic knee pain. Mr. Will looked across the auditorium and seeing my hand as being the only one raised shouted up at me “Liar” and proceeded to discuss the very topic of why it is important for patients to get involved with this aspect of healthcare. I completely agreed with him and regretted that he didn’t invite me up to the stage to discuss the matter further, but I guess he didn’t think he needed my help. Later that evening my brother and sister-in-law, who were sitting downstairs on the main floor said that after Mr. Will called someone a liar up in the cheap seats, they looked at each other and said “that was Rich”. 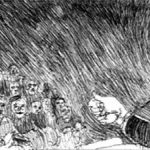 I wrote a couple of notes to Mr. Will after the lecture challenging him on his accusation and even considered suing him for slander but decided that it was probably good that I had him in my corner on this issue. I’m not so sure about the rest of them. Maybe next time he’ll call me a socialist]]>