A couple of weeks ago I was out visiting our family in Nebraska. As is part of our family tradition, I had the opportunity to attend a Nebraska Football game. 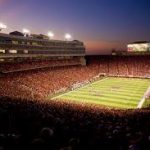 Like all Fall Saturdays across the country, college football creates a spirit and excitement unto itself. This was a particularly poignant game for me because my undergraduate Alma Mata, Ohio State was playing my graduate Alma Mata, Nebraska. While it may seem that I pick colleges on the basis of football powers, that was, perhaps, a coincidence. Regardless, rather than compromise I went with the Big Red of Nebraska for cheering purposes.

The first half of the game did not go well for Nebraska. Ohio State controlled the line of scrimmage and dominated play heading off to a 20-3 half time lead that jumped to 27-6 early in the third quarter. At that point, for some bizarre reason, I started thinking about my resilience model and how would (or could Nebraska) bounce back from their biggest halftime deficit in school history.

Remembering that the three mechanisms of resilience—preparation-navigation and bounce back comprise the opportunity levers for being resilient, I began to wonder if some kind of preparation that Nebraska does would create an opportunity to shift the momentum of the game. Just that actually happened at the 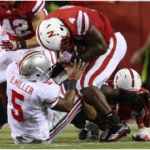 midway point in the 3rd quarter when Nebraska defensive player Lavonte David literally stripped the ball from OSU quarterback Braxton Miller. As the sportscasters described it later, “…Another millisecond later and Miller would have been on the ground and David’s strip of the ball would have been nullified…” But the turnaround had begin and by the end of the day, Nebraska won this game 34-27 and all was good in Lincoln.

Sporting events are great metaphors for thinking about resilience. Part of the benefit of using sport is that it is time limited and when they are over, they are over. Not so with our work and personal lives and that is what makes having a resilient mindset and good navigation skills even more important. Here are some reminders about navigating challenging situations:

· Focus—Take a look at the picture above and you can see that Lavonte David is definitely focused on getting that ball into his hands. You can’t be focused every moment, but you can be aware of what you are trying to accomplish

· Discipline—I have no doubt that Nebraska practice “strip drills” where they work on taking the ball away from other players. That is about preparation so that when the moment is ready, so are you

· Being agile—Agility means that you can change from one direction to the next. No doubt Nebraska coaches were emphasizing some changing ideas at half time and one of them was to break out of your standard play mode and make something happen.

Being in stressful and challenging situations happen every day and being able to respond to them effectively is more than just hoping they will go away or that we can “manage” them”. Think of your day as a sporting event (maybe multiple events) and look for the chance to turn a good situation into a great situation. Even if you are down 27-6 early in the 3rd quarter, remember there are still plenty of plays ahead.