Professional golfer Gary Woodlands won the US Open this past Sunday at Pebble Beach. Gary caught my attention last March at the Phoenix Open when he played a practice hole with a young 20 year old college golfer named Amy Bocerkstette. Amy is a special needs athlete and it is obvious from the video that both she and Gary had a great time. Amy played a famous par three where she put her first shot in the sand trap, followed up with an excellent sand shot out and then drained a right to left 15 footer. 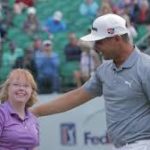 Gary shared that he kind of channeled Amy this weekend including her now famous mantra of “I got this,” which she said to herself before each of her shots on that hole. Amy used a simple mantra to reassure herself that she knew what she had to do and that she could do it.

Mantra’s are powerful tools that help change the way we think about any particular task. I was working with a client yesterday and we were talking about managerial courage. She needed to confront a colleague about some work that he was not being accountable for completing. After role playing how she would language her discussion, I shared with her about Amy’s story and told her that I knew she was prepared and could handle this challenge with grace and ease. She told me, “I got this.”

This site uses Akismet to reduce spam. Learn how your comment data is processed.

Free eBook
Subscribe to our Newsletter and get Richard's eBook

We use cookies to ensure that we give you the best experience on our website.
If you continue to use this site we will assume that you are happy with it.