How do you influence others? Do you use your role and title to get things done, try to create a collaborative approach, use rational thought to build your case, build on precedent or just go with the flow? In my coaching sessions I find that issues around influence are one of the most important topics that my corporate clients want to talk about. Most are competent in their relationship building, understand and can develop a strategic outlook and are typically great at executing. But their ability to impact their organization through influence rather than authority is frequently their weakest link. Over the next couple of blogs, I’m going to discuss the six essential tools of influence as developed by the world’s leading researcher on influence, Robert Cialdini who is a professor at Arizona State University. 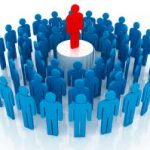 One of the first key things to get our arms around related to influence is to know that it is an emotional experience for people and not just a logical request by you. People react to your ideas and you must feel comfortable in respecting and using the emotional tools of influence to help win the day.  So lets take a look at Cialdini’s first 2 “weapons of influence” (there are six altogether) 1. Reciprocation–Ever notice how when someone does a favor for you, you feel a need to return the favor. Most people want to even the score and not be viewed as someone who does not repay debts. For example, you’ve probably received a fund raising request letter from some organization that included return address labels for your use. In providing labels to potential donors, the VFW observed that they almost doubled the number of people who contributed from 18% to 36%. Recipients often feel they should repay this favor by making a donation to the organization At work you probably already use this strategy by just wanting to help out someone when they do something nice for you but you can get ahead of the curve and bank some favors through a number of strategies such as providing free information, offering to help with a project or even sending a birthday card or celebratory acknowledgement. 2. Commitment and Consistency–You are a person of your word and so are 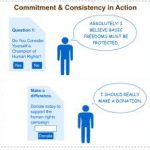 others. If you can get people to commit to an idea or goal either verbally or in writing they are more likely to to honor that agreement because people want to be consistent with their self image. In my work with corporations around promoting healthy workplaces, people who work with a health coach are asked to sign a health “pledge” that they will try out some of the healthy ideas like a walking club or joining a nutrition class. When signing the pledge or even making a statement of your belief as the illustration above shows people tend to agree with their aforementioned belief. Most probably you already use some aspects of these first two tools of influence. Part of the key to becoming influential is to use them consciously and consistently. Take note of situations where you can try them out and how effectively they work. I’ll be discussing the next two “weapons of influence” in my next blog post]]>