I was watching one of the weekend news shows and they were discussing Mike Bloomberg’s apology for the “stop and frisk” program that he put in place in NYC when he was Mayor. His apology was about his failure to recognize the consequences for thousands of young men of color being incarcerated under a questionable law enforcement practice. 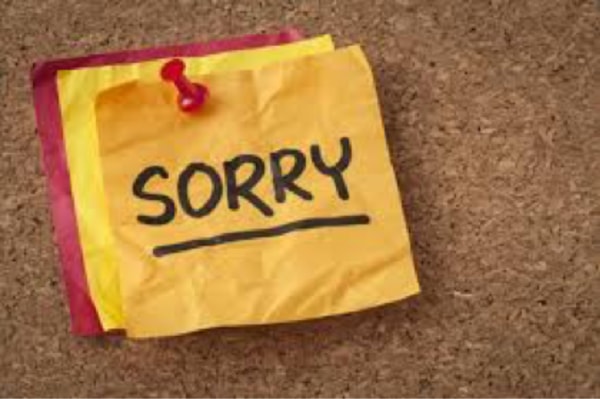 The commentator mentioned that she thought Bloomberg had a difficult time making that apology and that men of great wealth and power often view apologies as a sign of weakness. I watched the video of his statement from this past week and I agree that it

seemed difficult for him to say it,  yet he also seemed to recognize a genuine mistake on his part

Apologies are often hidden in an all-encompassing statement, such as “if I’ve hurt you in any way, I’m sorry,” but this kind of general statement rarely conveys an authentic element to the receiver.

An effective and powerful apology recognizes a specific action that caused harm and takes complete responsibility for the action and its impact. It also needs to provide an assurance that it won’t happen again—a lesson has been learned.

The heart of an apology is about humility and contrition and the self-recognition that it is okay to make a mistake as long as we learn from it.

Your Challenge This Week: Give or receive an apology and observe how quickly it allows you and the other person to move on from there.